In 2011 Naïssam Jalal formed the cosmopolitan quintet “Rhythms of Resistance” with four other talented musicians.

Combining many different elements, influences and registers, the group creates music that fascinates, with a fine sense of rhythm, rich improvisations and admirable energy. They take us to visit different aesthetic fields, and bring jazz and classical music, European music and Eastern music closer together.

« Rhythms of Resistance » remind us that resistance is still very much alive and taking a firm stand against standardisation. 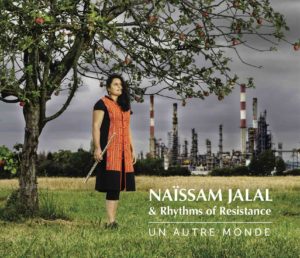 « Naïssam Jalal pursues her social, racial, and ecological struggles as convincingly as ever. She puts so much persuasiveness in her music, it  reminds the great struggle anthems of John Coltrane, Nina Simone, or Archie Shepp. A sound celebration full of life and hope. This double album is both a concentration of the fears of our time and the lights that we hope to see resurface. » Jazzaround

« Another world then. The one after, here and now. The music of this flutist, an essential figure of the French jazz scene, is a whole world, occupied by rhythms, melodies and voices that feed on influences drawn from across the seas and oceans to, who knows, dream of a unique continent. Naïssam Jalal leads this quest for plural unity carried by all the songs of the possible, at the head of a group where each musician takes care to express the most emotion possible in each chord, each note, each blow. The themes have a soft dreamlike force, the beat is sensual and hypnotic, the sound recording honours these messengers of the appeased beauty. » Jazz mag (SHOCK)

« In her new album, the flutist Naïssam Jalal is accompanied by the band Rhythms of Resistance and the Orchestre National de Bretagne conducted by Zahia Ziouani, and this album is double. Double CD, double view, double background, double glass, double meaning… The flute and the nay’s arabesques take us to « another world », one where we get drunk on music to live instead of surviving. » Médiapart

« Naïssam Jalal has within her the poetic forms and the rare understanding of revolt, and that’s beautiful, touching and exceptional. No doubt that’s her strength, which pushes her to write with her soul each note of this other world called on CD1. It is a raw, radical world that lets however, between two clouds, escape these poetic forms that are so important for her… » Paris Moove

« Naïssam Jalal is a flutist and an inspired and profilic composer. She follows a talented musical path, motivated by passion and curiosity. Born in the suburbs of Paris to Syrian parents, she has assimilated and transcended the essence of European and Arab classical music, the art of jazz improvisation, the urgency of hip hop, the euphoria of funk or the vitality of African traditions, with a keen sense of synthesis and a hyper-sensitive breath. » France Musique

« Naïssam Jalal‘s particularity is to skilfully mix flute, nay and vocals in a very personal way, which looks neither like Roland Kirk nor Magic Malik. The quintet remains at the heart of this live concert, well enhanced by the superb setting offered by the Orchestre National de Bretagne. This setting gives an extra dimension to this music mixing oriental tradition, jazz and classical music, with an sharp sense of melody. » Jazzhalo 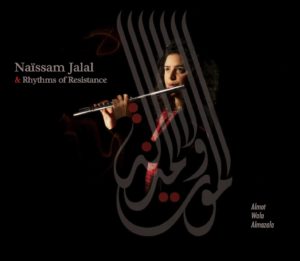 « Nimbed with mystery and poetry, Almot wala Almazala is a record of athmospheres and emotions, carried by an unprecedented lyricism » – Télérama ffff

« Her music is a claim without self-pity. It just carries in it the rage that animates our human condition with, for aspiration, the freedom ».
– Liberation

« Naïssam Jalal, angry, bruised, stunned, horrified or focused on the memory of a culture now devastated, her music appears as a direct projection of her soul, a vivid painting of the feelings that animate her. » – Les inrocks

« Rooted in the oriental tradition, Naïssam Jalal evolves freely in the interstices of jazz and improvised music, with the precision of a demanding personality in everything. Her music is instrumental but her speech is clear. – Kalakuta

« A music within the reach of all living souls, of all ears listening to the world ». – The Mountain 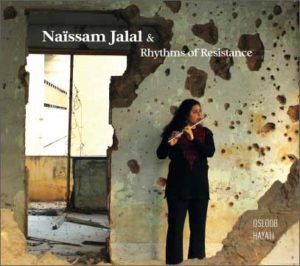 « With her new opus Osloob Hayati « My way of life », the French-Syrian flutist revolutionizes the boundaries of jazz by offering her nomadic style with her quintet Rythms of Resistance. A journey without borders whose objective is to open minds. » – RFI

« Naïssam Jalal release an album that stands out for the strength of its musical construction and its message. With her fertile breath, she magnificently links maqams, African pentatonic scales, jazz improvisation and the beatbox technique created by Afro-American rap. » – l’Humanité

« The French-Syrian flutist and composer blows the infinite rhythms of her resistance, as much musical as political. Her language is free, with a rare finesse and a nomadic depth. It is reinvented in contact with her musicians and her audience, at each concert. » – RFI

« Naïssam Jalal, lady flute on the groove, has criss-crossed the Middle East, but it is on the Parisian stages that she became well-knowed (and appreciated), grooving with her flute in the jazz, oriental and afro galaxies, where she excels. An enterprising and intrepid soloist, with a group of young jazz wolves and much more… » – Radio Nova

« Naïssam Jalal evokes a current resistance. It is played in the patio of our global and hyper-connected houses. Songs of tolerance, her music – committed, beautiful, courageous, improvised – sounds like a bulwark against the religious fanaticism and security withdrawal that tear apart our daily lives. » – Jazz News

« Rebellious with virtuoso assaults from her transverse flute and her nay flute, this groover prefers breaks in rhythm, lightly touched themes and the suspense of improvisation. » – Telerama

« The young Syrian-born flutist Naïssam Jalal is the most impressive at the head of her own ensemble, the cosmopolitan Rhythms of Resistance. Naïssam creates a music in her image: mixed and combative, which fuses compositions of great melodic richness, undulating grooves, precious harmonies referring to the music of the Middle East and a certain modal lyricism evoking as much as the nomadic music of Don Cherry and the obsessive mystical jazz of John Coltrane. – Jazz Mag

« Naïssam Jalal’s flute is straightforward, we can recognize her sincerity no matter how intense the musicians play.  » – Citizen Jazz

« With this first album under her name, Naïssam Jalal signs a master stroke, because her album will suit both traditional music lovers and those who like to mix them up. Between two worlds, between two musics, in this interval, this syncopation where everything is possible and everything is created. – Sun Ship