In their musical repertoire Osloob and Naïssam Jalal present an unusual combination: electrifying hip-hop – rap – with heady flights of melody from the flute. The beats and rhyming lyrics of Palestinian rapper, beatmaker and beatboxer Osloob blend perfectly with the improvisations of Franco-Syrian flautist Naïssam Jalal.

The result is a dialogue between two musicians with a seemingly perfect understanding of each other: Osloob the rhyming wordsmith delivers his verses, while Naïssam Jalal, creatively accompanying the MC’s beats, “raps” with her flute. The result is an excitingly bold and precise intermixture of sounds.

Their project title, « Al Akhareen », means « others » in Arabic. The lyrics and the music represent an interaction with the other; furthermore they appear not only as a duo, but also as a trio, accompanied by DJ Junkaz Lou, or even with a live band composed of Mehdi Chaib (sax, percussion), Viryane Say (bass), Clément Cliquet (drums) and DJ Junkaz Lou (turntables). 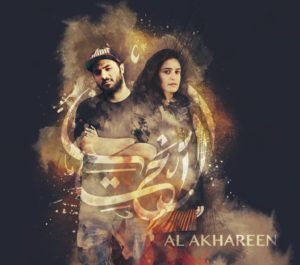 Favorite of the FNAC record shops, a burning record…

« Naïssam Jalal and Osloob release an incandescent masterpiece. Vital breath of a dreamed emancipation, the dove flute embraces the thick and knotted word like the olive tree. It is overwhelming. » – L’Humanité

« A new and uncompromising repertoire, a moving poetics, a lyricism full of hope. » – Qobuz

« A powerful machine that carries its words of anger and its verses of hope. » – Mediapart’s blog

« Al Akhareen take us to the depths of their mixed identities, their dreams and their stories, in an ode to the other, to others. » – Views

« There is a critical climate hovering over this record that still demands a spirit of resistance. » – Jazz news

« A careful production that never falls into cliché or tawdriness. » – Citizen Jazz

« A clever combination of urban grooves, jazz and traditional sounds, breaking boundaries and conventions through a new aesthetic. A deep and poetic approach to the notion of freedom. » – Hiko’s reviews